This week, Netflix blessed us with the surprise announcement that once-cancelled television show Next In Fashion, is actually going to be renewed after all and this time, with a new host.

When it was axed after the first season, plenty were left feeling quite confused. Next in Fashion had an 85% percent rating on Rotten Tomatoes, which can be pretty hard to come by, plus the 10-episode show saw an impressive roster of celebrity guest-judges sign on for appearances, including global fashion influencer and Instagram maven Eva Chen, prominent fashion designers Prabal Gurung, Kerby Jean-Raymond and Christopher Kane, supermodel Adriana Lima and the legendary Tommy Hilfiger. 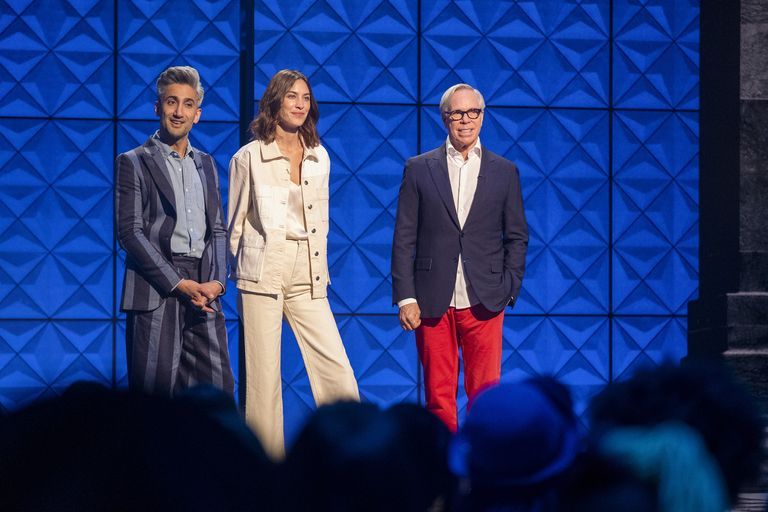 Tan France, Alexa Chung and Tommy Hilfiger on Next In Fashion

Hosted by Tan and model-cum-fashion designer Alexa Chung, the show gave 18 fashion designers the chance to face off in a range of challenges, with the eventual winner – a designer named Minju Kim – taking home a $250,000 (£185,000) cash prize, plus the chance to sell her designs on Net-A-Porter. It was a pretty big deal, and the competition was fierce!

Who Will Host Next In Fashion Season 2?

On Monday, the streaming platform put out a tweet to herald the coming season of the series, with the added reveal that Tan France (of Queer Eye fame) will have a new co-host – none other than 26-year-old supermodel and mother of one, Gigi Hadid.

Posting a picture of the pair posing at the CFDA fashion fund awards in 2019, the tweet read simply: Next in Fashion is coming back — and this season, @TanFrance‘s co-host will be the iconic @GiGiHadid! 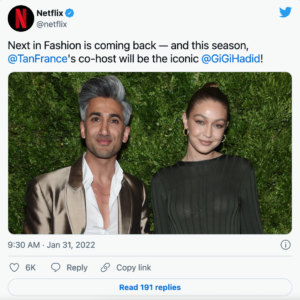 Gigi Hadid and Tan France also tagged each other in Instagram posts, announcing their partnership on the project and letting any budding designers know how to apply.

This is the link to apply, if you’re interested.

It won’t be Hadid’s first appearance on a show of this kind, as the model has previously acted in guest judge capacity on similar design competition show Project Runway. 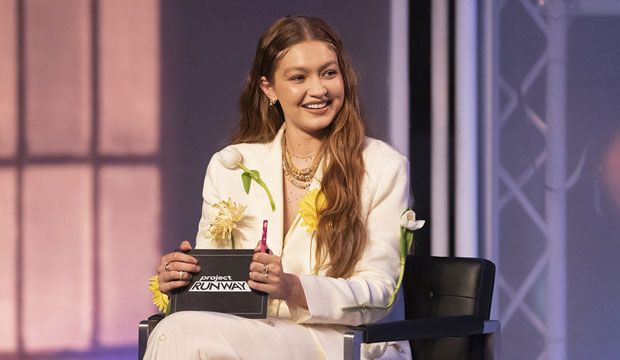 Viewers are understandably thrilled about the show coming back:

But not everybody was happy to learn that Alexa Chung wouldn’t be making a grand return:

Why is Alexa Chung not hosting Next In Fashion season 2?

Unfortunately we’ve no idea yet as to why season one’s formidable host Alexa Chung won’t be returning as Tan France’s co-host for the next season. The pair had great chemistry, as you can watch for yourself below when ELLE filmed the duo for our fashion game ‘It’s A Mood’.

https://www.elle.com/uk/life-and-culture/culture/a30699266/alexa-chung-tan-france-interview/
Many fans of the pair are at least hoping that 38-year-old Chung might make a cameo, perhaps as a guest judge on one of the episodes.

When is Next In Fashion’s release date?

Considering the casting call has just been put out, the show may not have any confirmed contestants yet, which means it can’t begin filming. So we could be waiting a little while for a release date to be announced.

If we’re to judge by the timeline of the first season, Next In Fashion season one finished filming in May 2019, but wasn’t available to watch on Netflix until eight months later, in January 2020. That said, perhaps with learnings from the first round, they might be able to hurry production along a little faster and get season two out before the end of 2022. Here’s hoping!